Who hates it when movie executives decide to revamp/ remake/ redo an old classic? I do. It was too much annoyance to many when Disney took on the decision to make a live action movie of an old classic (Beauty and the Beast is next to follow), and now that the movie has been released, the verdict is in: 95% approval ratings on Rotten Tomatoes. Disney has done well.

The movie adaptation follows Rudyard Kipling’s novel more closely than did that Disney adaptation in the 60s (the cartoon we all grew up watching ever so fondly). Make no mistake, the movie version is filled with all the animals of the jungle, but also keeps it real with some serious themes: friendships, loyalty, love and death.

The movie adaptation sticks to Rudyard Kipling’s novel more closely than did that Disney adaptation in the 60s (the cartoon we all grew up watching ever so fondly). Make no mistake, the movie version is filled with all the animals of the jungle, but also keeps it real with some serious themes: friendships, loyalty, love and death.

We follow Mowgli (Neel Sethi), a man cub who is raised by a pack of wolves. Enters Shere Khan (Idris Elba), with his thunderous roar, and seeks Mowgli for his own nefarious plans. With the help of Bagheera (Ben Kingsley), the no nonsense panther, Mowgli leaves his adopted family of wolves into the jungle to join the human village, a place where he supposednly belongs. 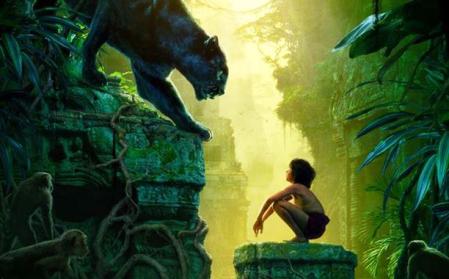 En route, in a terrific buffalo stampede scene that is as powerful as the stampede scene in The Lion King, Mowgli is separated and ventures further into the jungle. He encounters the devilishly beautiful Ka (Scarlett Johanson), a snake who through her mystifying vision allows Mowgli to see into his past. While Ka’s inivitation to be protected sounds tempting, Mowgli is rescued from Ka and is able to escape. He finally bumps into the free spirited Baloo (Bill Murray) who develops a strong bond of friendship.

Along the way to the human village, Mowgli learns several life lessons which forces him out of his shell of being an adopted wolf and into the “man” that he needs to be. Friendships are tested, hard truths are faced and an epic battle is fought between Mowgli and Shere Khan, which is a pure delight to watch.

It’s only at the end of the movie that one realizes what a triumph this movie is. Despite the fact that there are no human actors in the movie apart from Mowgli, there is a huge dollop of humanity all over the movie. The CGI animals are so well thought out that they almost pass off as real animals, very much like Richard Parker in Life of Pi. Technically speaking, The Jungle Book is par excellence in film making.

There are some heavy themes in the movie, and younger children should be warned about the darker elements. There are indeed several deaths of some of the main characters, which may need some explaining to the little ones. There are also some intense scenes that are borderline creepy, such as when Ka entices Mowgli into her world, or the ferocious Shere Khan leashing out at Mowgli. Little children in the theater were either hiding behind their tiny hands, or jumping out of their seats with sheer fright.

Though there are no songs in the movie like the animated version does, there is indeed one pleasant surprise when Baloo and Mowgli sings Bare Necessities, which is a powerful song reminding us of the simplicity of life, and how one only needs the bare necessities in life to stay content, or in the case of Baloo, lots of honey.

The movie is directed by Jon Favreau, who directed Iron Man, and it’s evident his skills as a director is right up there among other world class directors. From the cinematography, to the attention paid to details (check out the little frog who wipes his head in the rain), to the awesome action chase scenes (the final epic battle literally had me on the edge of my seat and left me breathless), to the 3D effects that made for an extremely immersive experience inside the jungle, the movie is a complete family entertainer.

I still cannot forget the little child who was sitting two seats down, who literally jumped out of his seat screaming out the names of the animals as they came on screen, and that to me is a sign the movie is a success, because underneath all the technicalities, the director has essentially made a movie for the children.

The Jungle Book is a wonderful movie, filled with gorgeous and sumptuous visuals, brimming with a solid story line, and as we venture on Mowgli’s epic journey of fun and adventure, we cannot help but immerse ourselves fully into the depths of the jungle with sheer delight and childlike pleasure.