Every once in a whiles comes a movie out from Bollywood that is based on a novel, such as Omkara (Othello), Maqbool (Macbeth), Lootera (The Last Leaf) among many others. Fitoor, as is made clear in the opening credits of the film, is itself based on the widely read Charles Dickens’ Great Expectations. With that piece of knowledge in mind, one’s expectations go very high with a movie like this. Sadly, despite the solid beginning, the movie falters and fizzles out by the end.

Fitoor means a kind of madness, generally a madness for something or someone. You could call it obsession or passion, but I feel fitoor is a little more quirky in a way.

We are introduced to Noor (Pip from the novel), a young, shy boy in Kashmir. Coming from a low class family, he works with his brother in law as a carpenter. They are hired to carry out some works at the huge estate, inhabited by Begum Hazrat (Mrs. Havisham from the novel) and her daughter Firdaus (Estella from the novel). Despite the fact that Firdaus belongs to a high class family, the two children still spend time having fun. It’s not long enough when Firdaus is sent away to London by her mother, who disapproves of her daughter being friends with a low class boy. Noor is indeed heartbroken.

Many years later, Noor (Aditya Roy Kapoor) has grown up to be budding artist and a mysterious benefactor, who doesn’t want to be named, sends Noor to Delhi on an art scholarship. Noor assumes it’s Firdaus’ mother. There he meets Firdaus (Katrina Kaif), who herself has returned from London having studied design. Old flames are revived in Noor, but Firdaus has no feelings for him. She is hooked to her own boyfriend. This doesn’t deter Noor from pursuing the love of his life. 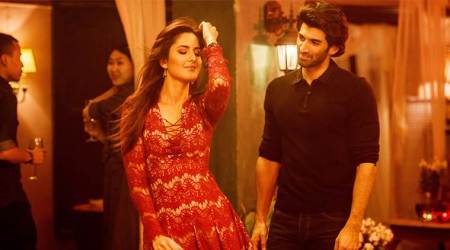 Circumstances change, and Noor becomes a successful artist, all the while Firdaus is getting married to Bilal, a Pakistani diplomat. Begum Hazrat (Tabu), is adamant that her daughter doesn’t fall for Noor and tries her best to keep the two separate. We enter the rather unique backstory of Begum and understand where her hatred for the world comes from, and why she is so persistent in trying to make sure her daughter doesn’t find happiness. With a series of twists in everyone’s lives, circumstances change, and everyone’s expectations of what they will get in their lives are all turned around.

This was one movie I really wanted to like for three reasons: the source material, the production values and the awesome music (Ye Fitoor Mera is my favorite of them all and made for awesome music in the theater!) So what went wrong?

One, the lead actors. Aditya Roy Kapoor may have spent a year in getting that near perfect body, complete with six packs, but his acting just couldn’t keep up with such a character. Noor required a lot of intense and passion, which Kapoor had in some moments, but otherwise didn’t. He needs to fire his hairstylist too for giving him such an unattractive hairstyle too. (Ranveer Singh or Ranbir Kapoor were better choices!)

Katrina Kaif fares a lot worse. She looks amazing, especially with that smoking red hot hair, but that’s about it. She just cannot act. I didn’t connect to her character at all and for me, every time she came on screen, that was when the movie would go downhill. (Priyanka Chopra or Deepika Padukone were better choices!)

The only thing that saved these young actors was Tabu, who played the mother. She brought such an intensity to the role, that you can feel her anger and remorse. She would light up the screen and bring some excitement to the unfolding drama.

Two, the story. The pacing of it all was slightly off. We didn’t really need that song in English, nor did we need long, lingering scenes of Kashmir, not to mention several side characters. The diversion from the main characters proved to be distracting, with various subplots of terrorism etc. Though the movie is only 2 hours 11 minutes, the pacing is indeed slow for what could have been a great movie otherwise.

Three, the end. What the Dickens? What just happened? When movie makers tend to wrap things up ever so neatly, one cannot help but wonder why they chose to take the lazy way out.

Since I’ve read the book, I wish the makers had dealt with the great themes that were present in the book: wealth, social class, redemption through love, ambition and the role money plays in one’s advancement in life. Since the movie has been declared a huge flop, word is out that one of the main reasons for Fitoor being declared a colossal flop is that the director had massive creative differences with the producers, where the director wanted to stay faithful to the novel and the producers wanted to Bollywood-ize the movie (which explains the exclusion of the song Pashmina from the movie).

On a side note, I did notice that there was a LOT of red color used everywhere– from Firdaus’ dresses, to Noor’s car, to his painting, to Firdaus’ hair, to red Chinar leaves– basically everywhere. Was not sure what it meant to symoblize, but it was everywhere.

Even though there was a huge potential to make it a success, Fitoor is a disappointing adaptation of a great novel. Watch at your own risk.