Graphic novels have a unique cult following in the world, and apart from the usual comics, novels such as Life if Pi, The Alchemist and The Kite Runner all have been adapted into graphic novels. Joe Sacco (Footnotes in Gaza, Palestine) and Marjanne Satrapi (Persepolis) are some of the more well-known graphic novelists in this part of the world. Graphic novel allows the readers to experience a novel in a rather creative manner, allowing for the visuals to do the talking and add depth to the plot.

Which brings us to the fact that Sparrows at Heart is perhaps Pakistan’s first and only published graphic novel.

Sparrows at Heart follows the life and times of renowned artist Shakir Ali. To the uninitiated, which includes me, Shakir Ali was a hugely influential artist who famously led the National College of Arts to it’s glory. He enjoys a massive following in Pakistan and his legacy still continues till today with artists like Jamil Naqsh and Ahmed Pervez citing Shakir Ali as their influence. Sparrows at Heart was released at the time when Shakir Ali’s 102nd birth anniversary was recently celebrated in Pakistan.

The graphic novel is the brain child of two young, creative individuals: Haider Ali Jan, a visual artist based in Lahore, and Zain Naqvi, a designer and illustrator, both of who are graduates from NCA. Research included, the duo spent close to four months working on this novel, where one focused on the writing/ storyline and the other focused on the visuals.

We follow the life and times of Shakir Ali, from his childhood in Rampur through his years in Europe, ultimately bring him to Lahore to lead NCA as the principal. Along his journey, we are given insights into his relationships with his father and sister, his life in Delhi where his masculinity was brought into question, to his marriage and failed relationships, to his encounters with political figures and European culture. While it was not possible to fit in his entire life story, the authors had decided to show as many different sides to his personality that makes him who he is. This brings a rather personal experience for the readers who would know so little about his personal life. 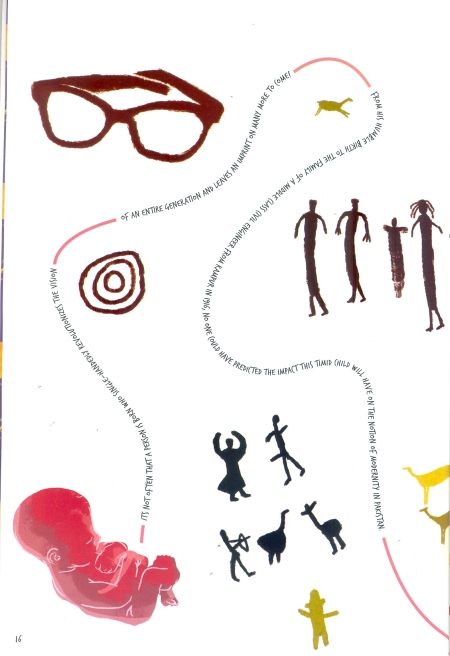 While going through the novel, one can see the different kinds of visuals which according to the authors represent the style of art that Shakir Ali would use. Each page is distinctive from one another and tells it’s own story. They have indeed taken a bold step to use atypical layouts, with sentences that are curled up, or spread out across the page. There are a lot of visual motifs too, namely the sparrow interspersed throughout the pages. At 81 pages, Sparrows atHeart is a quick read and an enriching reading experience too as the readers fall into the sumptuous visuals.

In the preface by Salima Hashmi, she had to say the following about Shakir Ali: “It was this breadth of vision he brought to NCA through his presence. A generation of architects, artists and designers grew up under his wings, bred in a culture which encouraged freedom of thought, investigation and making of work in tune with the need of the time.” There is no need for any further explanation on the influence Shakir Ali has today amongst the artisan community.

Sparrow at Heart was a wonderful reading experience for me for two reasons. One, I got an insight into the life of Shakir Ali (of whom I had very little idea about) and how much of an influence he had on what we call modern art in Pakistan. Two, being an architect and a creative person myself, I fell in love with the concept of a graphic novel. By no means is this a flawless or perfect graphic novel, but it’s the beginning of a movement that will blow up in the next couple of years. Credit to the authors Haider Ali Jan and Zain Naqvi for paving the way to more creativity through writing and coming out with Pakistan’s first graphic novel.

Cristian Mihai
How to be cool