*If you haven’t seen the movie yet, please stop reading, unless you are the kind who doesn’t mind reading before watching, although this post is not a review but rather my sentimental reaction to the brilliant movie*

Star Wars: The Force Awakens has made headlines when it was revealed that it made more than $100 million in pre-sales tickets. Since it’s release a week ago, it made a record breaking $890 million worldwide uptil today. It will probably head towards the $1 billion mark by this weekend. Whether it will beat the record of Titanic ($2.2 billion) or Avatar ($2.8 billion), remains to be seen, but one thing is sure: Star Wars The Force Awaken has literally taken the world by storm.

So the pertinent question becomes, is the hype justified?

In simple words: if you are a huge fan (like me, who wanted to be Han Solo while growing up) the hype is justified. If you are not a fan, then you will probably find the hype being just that: a hype.  (If you do plan on watching it, make sure it’s on the IMax 3d, and not a regular cinema, to appreciate the movie in it’s fully glory, as some scenes have been shot with Imax cameras). 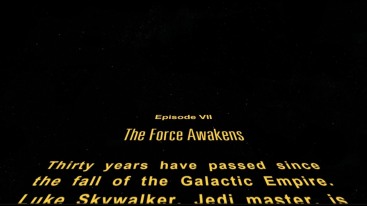 Star Wars: The Force Awakens, to the uninitiated, is Episode 7 in the series, and is set after Star Wars The Return of the Jedi. The minute the movie opens up with the title Star Wars, and those famous words: “A long time ago, in a galaxy far, far away….” you know you are going back to your childhood. With much excitement you read the basis of the story in the recognizable essay format floating on your screen. The music draws you in and magically transport you back to the time when you first saw the original Star Wars back in the 1980s.

That is what this movie is primarily about: nostalgia.

I won’t get into the what the plot is, for that would be spoiling a great deal of fun, but I will say this much that it does a lot of borrowing from the original movies. You will recognize a lot of shots from the original movies: we have a R2D2 type droid robot; we have a shot of Rey on a speeder bike which reminds us of Luke on his land speeder; most of the space chase scenes are reminiscent of the older movies and so on. Clearly, director J. J. Abrams is having some fun with his audience.

Several times, during the movie, a few characters say the same thing: “we’re home” and “let’s go back home.” That I feel is what this movie becomes as we are taken back to the original trilogy: the music, the fight scenes, the references to older movies (Darth Vader’s mask is also seen), the discovery of family relations and so on.

This will pose a problem for those who are not into Star Wars, and if you haven’t seen the previous movies, then Episode 7 will be a dud to you.

Having said that, the movie moves along just absolutely fine. The comedic elements makes you chuckle, the fight scenes excites you, the space chase gets you exhilarated, the emotional drama is just about right without getting sentimental. Watching some of the old characters come back from the original trilogy proved to be such highlight, evoking applause and hoot calls from the audience. We all had massive grin watching Han Solo enter the huge Imax screen. We all were delighted watching R2D2 come back on screen. Not to mention Chewbacca, Leia, C3PO and Luke Skywalker!

It may have felt like treading on a similar path that I did back in the 1980s, but it didn’t deter me from loving the movie. J. J. Abrams will be credited for introducing Star Wars as it should be to a whole new generation who will get to know the greatness that Star Wars is!