Johann Hari’s book on his personal journey through depression, and how he resolved his issues, is such an amazing read, so much so, I am trumpeting all over how much this book needs to be read. There’s been enough buzz on his book and his ideas- even Jemima Khan and Matt Haig have endorsed his book! 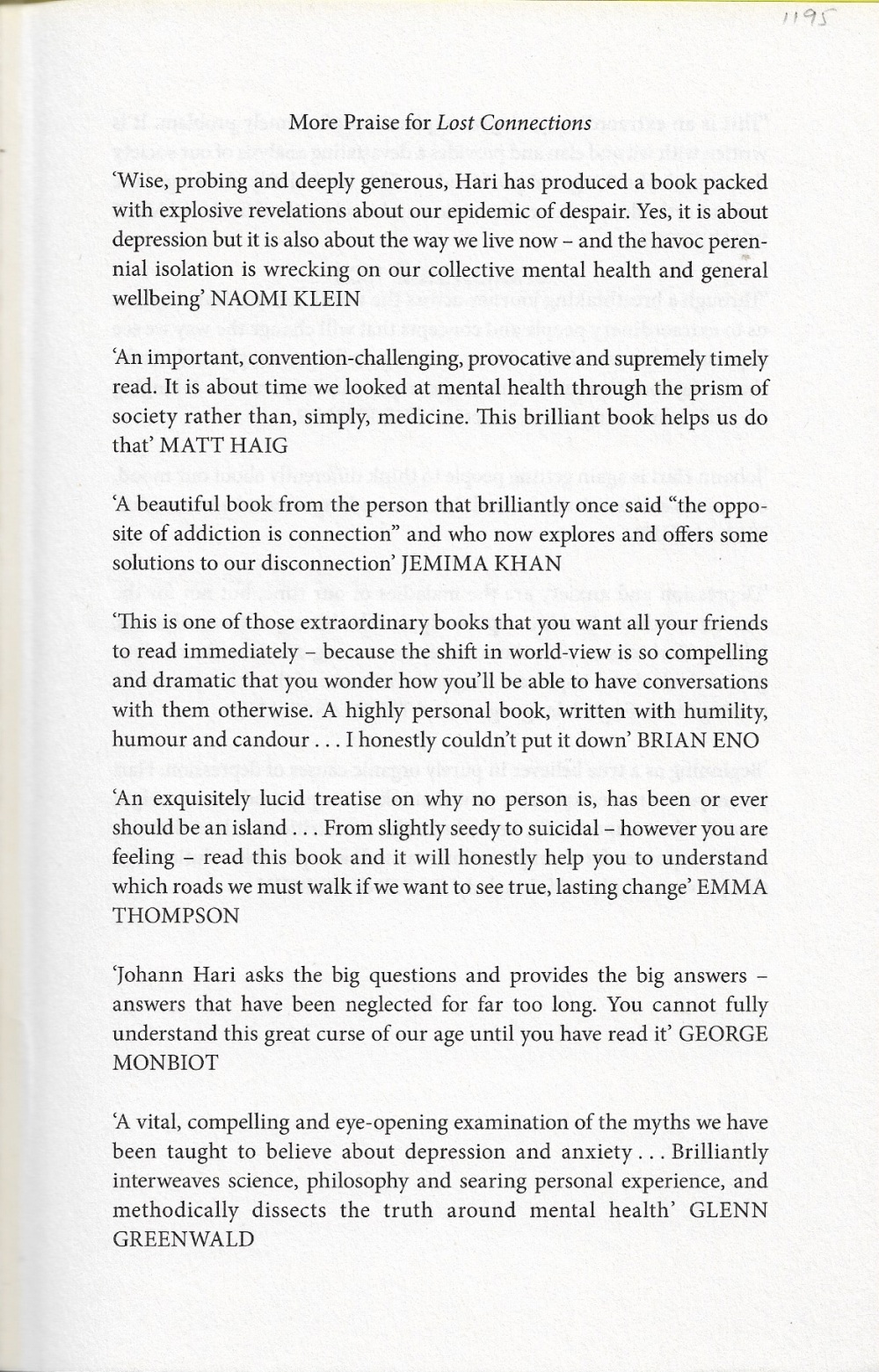 Hari dives right into an anecdote of him in Vietnam in the opening chapter, where he encounters severe food poisoning, and with no time to go to any hospital, he is instead taken to a small village, where the local doctors treat him. It is one thing that the doctor tells Hari, that stayed with him throughout his life:

“You need your nausea. It is a message. It will tell us what is wrong with you.”

As simple as it may sounds, this statement carried with it profound meaning (and I’ll come back to it at the end!)

Hari begins the book by disclosing how he started taking anti-depressants at the mere age of 18. He was told by his doctor that he suffered from a chemical imbalance, hence the need for medicines. Despite Hari leading a good life and traveling, depression had attacked him and he would end up crying through his moments of weakness. He was convinced that his depression was innate, and because his mother had periods of depression and anxiety attacks, he inherited the so-called depression.

However, at the age of 31, he realized, courtesy his personal therapist, that despite taking drugs for so many years, the depression is still there. This was the moment when he started questioning his depression: “Could something other than bad brain chemistry have been causing depression and anxiety in me? Why was I still depressed?”

Trained in Social Sciences, Hari interviews doctors, scientists and researchers and discovers that anti-depressants aren’t all that they are projected to be, and that depression is caused by other things.

In my favorite part of the book, Hari debunks the idea that anti-depressants don’t work as effectively as the doctors who prescribe them. I know this much to be true because when I was on Zoloft myself, I quit taking them after 6 months because I could sense they weren’t really working on me. I had to find other ways to kill my depression.

Hari propels the idea that anti-depressants have a placebo effect, in other words, it’s all psychological and the drugs don’t really do much. “The numbers showed 25% of the effects of anti-depressants were due to natural recovery, 50% were due to the story you had been told about them, and only 25% to the actual chemicals.” ([page 22).

Having talked to prominent scientists, researchers and doctors in the US, they have all started on record that anti-depressants don’t really work the way they are projected to the world. The control by the pharmaceutical companies is so strong that they don’t want people to stop taking these drugs. So why do the people continue to take these drugs? They take them because they believe that the drugs will work.

Another interesting thing Hari discovered that there is enough evidence to suggest that most people who are taking these drugs, even for years, they are still anxious. So clearly, these drugs are not really doing their job.

According to the two doctors, George and Tirril, there are two things that make “depression more likely- having a severe negative event and having long-term sources of stress and insecurity in life.” Nothing to do with a chemical imbalance in your brain.

a. Simply said, a job in which you are not satisfied and feel like you are doing nothing real or authentic will add on to depression.

b. Only 13% of workers in the US are actually satisfied with their jobs.

c. Employees stressing out in their jobs, from deadlines to meetings to handling rough colleagues and bosses, work can be stressful and lead them to feel they are actually useless robotic employees. Hari uses the term disempowerment to describe this, and this is at the heart of poor health.

2. Disconnection from Other People

a. Loneliness is a huge cause for depression

b. Disconnection from people around you has the same health effect as obesity

c. To end loneliness, you need other people- to share- but this sharing has to be meaningful to both of you to make a connection

d. Social media is not “connection” to other people

a. Intrinsic motives: things you do purely because you value them

b. Extrinsic motives: things you do in order to get something back- money, status or admiration

c. Realize the difference, and start focusing more on your intrinsic values to make a strong connection with your value

b. Emotional abuse was more likely to cause depression than other kinds of trauma

c. If you have childhood trauma, think not about what’s wrong with you, but think about what happened to you

5. Disconnection from Status and Respect

a. People who moved to green areas experienced less depression

b. Faced with nature, you develop a sense of how small your problems are and how big the world is- and this will help shrink your ego down to a manageable size.

7. Disconnection from a Hopeful or Secure Future

a. Extremely depressed people are disconnected from their sense of future- they see everything as hopeless because their future is uncertain.

8. The Real Role of Genes and Brain Changes

a. The genetic factors that contribute to depression and anxiety are very real, but they also need a trigger in your environment.

b. For far too long, the story was it’s your brain that’s been imbalanced. Now, the new story is that it’s not your brain, but your life events that have resulted in your depression, and you are in fact rational and sane.

In the second part of the book, Hari address each of these nine disconnections and gives techniques and advice on how to restore these connections. There are some wonderful ideas discussed, such as bringing down our ego, allowing other people into our lives, looking at what matters to us instead of what the matter is with us and so one. In particular, I loved Hari’s message of cultivating Sympathetic Joy- which was a brilliant technique for me to pick up—instead of being envious, I can be happy for others.

Prayer. Cognitive Behavioral Therapy. Psychotherapy. Meditation. These are all avenues through which many people can deal with their depression.

When Hari was told by the doctor in Vietnam to understand your nausea because it is a message to him- all he was saying was to look within yourself to find a solution. This idea that depression is not caused by a chemical imbalance in your brain but rather with the way we live our lives, has completely turned around what depression and anti-depressants are all about. 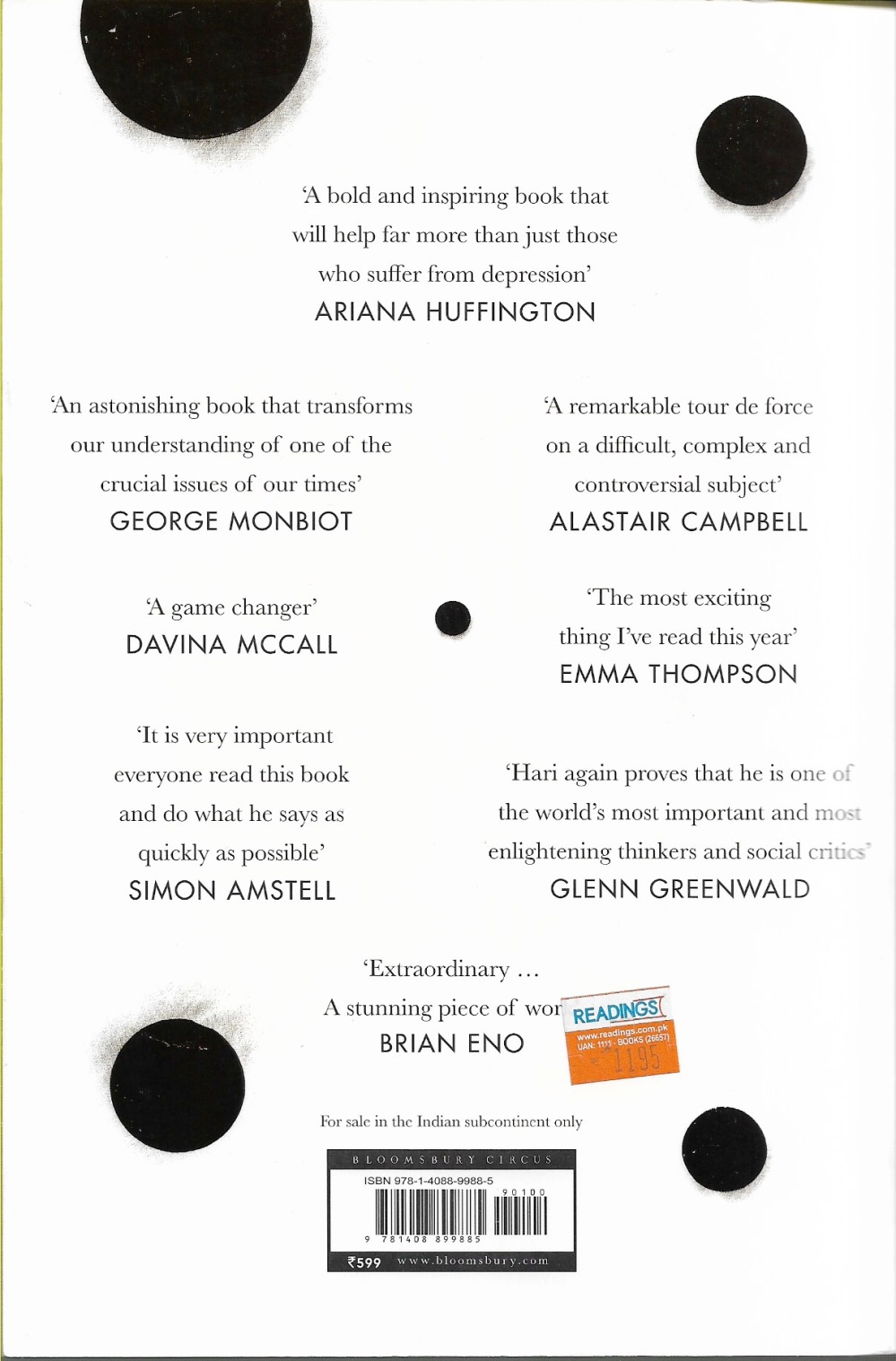