One of my favorite cuisines in the world is Lebanese food! I cannot stop raving about their mezze– hummus, cheese sambousaks, fatoush, grilled halloumi cheese and the list goes on. Having lived in the Middle East has certainly made my taste buds accustomed to the Lebanese food!

So it was with much delight that a friend invited me to try out the newly opened Cafe Beirut in Gulberg. I was excited no doubt and was looking forward to having some authentic Lebanese food. It helps that there is a chef from Lebanon who is handling the kitchen, so we were guaranteed to get authentic Lebanese food, and not some Lebanese- Pakistani version!

Since it was a weeknight, we had no issues with parking, and so thankfully we didn’t have to struggle to look for parking space. The front of the restaurant is somewhat inviting, and the rooftop area looked welcoming– that’s where I wanted to head. The interiors of the eatery didn’t feel as warm as some of the Lebanese restaurants I’ve frequented in the Middle East– the cliched colored hanging lanterns and paintings of Arabs were adorned on the wall. The steps leading up had Multani tiles placed on the riser (totally not Middle Eastern design!)

Having said that, we got a great table on the rooftop and the manager was kind enough to arrange for the heater right next to our table. This was perfect as we sat there for the next two hours, catching up over some rather delectable food. 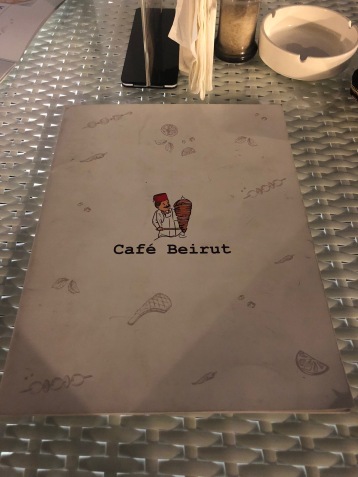 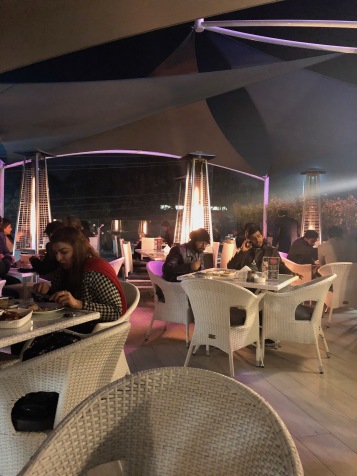 Here’s what we ordered:

In short, I wouldn’t say that it’s the best Lebanese I’ve had, but being in Lahore, this is probably the closest I’ve been to having authentic Lebanese food. The hummus had just the right taste and texture, which was so good I was munching on it throughout the meal. Baba Ghanouj was a good attempt too, but something was lacking its taste- so that was left aside. The warm bread they brought along with the mezze was good, and it’s advisable you eat them bread immediately for they start to go hard once they cool down. At a moment like this, I did miss the soft Arabic bread that is usually served in Lebanese restaurants. Fatoush was also not bad, but it had spices that suit the Pakistani palate– I wish they had stuck to their original Lebanese flavors.

I thoroughly enjoyed my chicken shawarma, which again, was almost as close to the shawarmas I would eat in Dubai. I absolutely loved the white garlic/ mayo sauce they served with the shawarma. The meat/ lamb shawarma was something I wasn’t a fan of. There was just something different about the lamb, not in a pleasant way,  that made it less tasty.

The ambiance of the rooftop was great, which we really enjoyed and didn’t realize in that moment that we had been there for a little over two hours. They served us complimentary kahva- Sulaimania Tea– and that was indeed the most authentic item on the menu. It really sent me back to Turkey actually!

All in all, I would Cafe Beirut is probably the closest you can get to authentic Lebanese in Lahore. I applaud the Lebanese chef to provide us Pakistanis with genuine Lebanese food, and since this is a new eatery, I am sure they will take in constructive feedback from their guests and improve on the taste of the food.

The total bill- I just had to ask my host- would have probably been about Rs. 3000/- for two persons.