My biggest fear while watching Padmaavati was that it will be like Bhansali’s previous outing Bajirao Mastani. Both movies are based on historical characters, set in 13th century or so, revolving around a love triangle set in an era where matters are solved through battles. My fears were wiped away as soon as Padmaavati started and I knew I was in for an exciting ride into the times and lives of this woman known as Padmavaati.

Before I get into the movie, I did some research and it’s interesting to see where the source material for the movie came from: an ancient Sufi poem, Padmavaat, written by Malik Muhammad Jayasi in 1540. The epic poem revolves around Rani Padmini, Queen of Chitoor, who is wife to Ratan Sen, and Sultan of Delhi, Allaudin Khilji, who goes out of his way to get Queen Padmini. This is the basis for the movie. There is a lot of debate of how far the truth is, and allegedly the two men are indeed historical characters, but it is still not sure whether Queen Padmini actually existed or not.

Why the controversy? Director Sanjay Leela Bhansali has indeed taken some liberties with the characters, for which he had to face a lot of protests and uproar from the Indians. One, the Rajputs are very upset for glamourizing the role of Khilji, the Muslim tyrant who desires Padmaavati; two, the women are very upset for making the movie more about the love angle rather than focusing on Padmavaati’s ultimate sacrifice; and three, general historical inaccuracies, and oh yes, Queen Padmavaati never really danced in front of so many men and women, as is shown in the movie.

Padmavaati is a grand, opulent film with the typical Bhansali’s excesses: huge sets, hanging chandeliers, royal costumes and jewelry, swords and shields, large forts and huge cinematic landscapes on which battles are fought. There is a lot to feast on visually—with each nose ring and necklaces, to the embroidery on the costumes and head gears, to the decorations of the rooms.

In the hands of a competent director, every scene is a piece of art- I mean I could easily take lots of pics and frame the scenes. The pacing of the movie works really well, and surprising moves at a decent pace to keep us audience engaged. The script worked well, the dialogue was not heavy handed—it was understandable enough for someone like me (otherwise I rely on subtitles in movies with heavy Urdu!)

The only part one starts to lose interest are the few moments before the explosive finale. It does tend to drag a little, and one song Khali Bali could have been shortened, or removed altogether. But it doesn’t ruin the movie watching experience.

Having said that, I cannot help but praise all three main actors: Ranveer Singh as Allaudin Khilji, Deepika Padukone as Padmavaati and Shahid Kapoor as Ratan Sen.

Out of the three, Ranveer Singh comes out the strongest, for his role is the meatiest one. He plays a Muslim tyrant, who is hungry for power and wants to be the Sultan of Delhi. He is told about Padmavaati, and is hell bent on ‘seeing’ her. It is his desire for her that forces him to camp outside her fort for six months and striking a deal eventually to get to see her, with some disastrous consequences. Singh brings his usual energy to the character, and does an extremely incredible job of humanising an otherwise vile character. There are moments we hate him, and there are moments we feel for him- which is a trademark of an accomplished actor. Ranveer Singh has gone on record to say that essaying the role of Khilji, a character with such dark and evil shades, had a negative impact on him in real life, and actually had to work hard to come out of it to regain a sane mind. Singh is a brilliant, dedicated actor and I wouldn’t be surprised if he wins all the major acting awards.

Deepika is not far behind in terms of strong acting, and I was worried she might do something similar to her role in Bajirao Mastani, and thankfully she doesn’t.

Her eyes, her facial expressions, her body language are all so masterfully handled. She is currently my favorite Bollywood actress and with this role, she has another feather in her cap.

Shahid Kapoor, who is another brilliant actor, does a fine job of playing Ratan Sen, even though his role isn’t as fleshed out as Khilji’s. 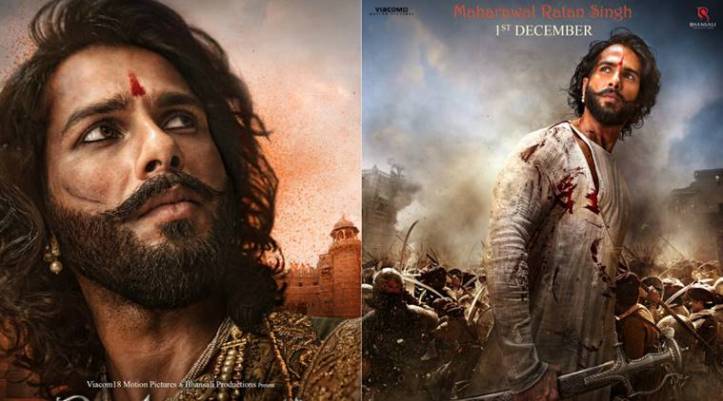 Despite that, Shahid Kapoor stands out in some of the more intense scenes, as well as the battle scenes. I was reminded of Shahid Kapoor’s role in another brilliant film of his Kaminey.

(On a completely different side note, both Ranveer Singh and Shahid Kapoor have made me set some serious health and fitness goals– they have the perfect bodies with six packs and all, which I have noticed Bhansali loves to show in his movies! There are some homoerotic moments between Khilji and the male eunuch which had overtones of male bonding, including one where both of them are in the same bathtub).

I will also mention two other characters that stood out: Mehrunnisa (Aditi Rao Hydari) who is Khilji’s wife, and Malik Kafur (Jim Sarbh), a male eunuch who is Khilji’s right hand man. Brilliant acting all round.

The songs were adequate and Ghoomar actually stood out the most, with its mesmerizing dance sequences and music. The action sequences were fun to watch, especially when the arrows are shot and the catapults are used. There have been some complaints of some shoddy CGI work and unnecessary use of 3D, which wasn’t really an issue for us since it was 2D for us (yes, there are some moment when CGI is indeed shoddy, but at the moment it didn’t really matter for the movie was intense!)

Over all, Padmavaat will be a film that many will remember in years to come and will always be referred to as that definitive film on love, war, valor and sacrifice.

Which brings me to the finale—OMG! I was blown away. It is an ending that will stay with you for a while after the movie ends. It was such an unexpected ending, I didn’t even imagine it would end like this. The entire end sequence, with its loud background noise and ongoing battle, this one little sequence involving Deepika just tugs at you emotionally.