Ok, seriously, don’t let the title of the movie put you off like it put me off initially. Why the heck would I want to watch a movie called Toilet? Will the movie be full of crass and below the belt kind of humor? Will the movie be like one of those inane comedy movies that Akshay Kumar is known for, such as Housefull? Turns out that Toilet is actually a real story with some serious message behind it!
The opening frame of the movie- we are shown a small town in India, where we see a group of women all huddling together to go for a walk, before sunrise. It turns out that these women do this on a daily basis. Once they get to a certain place in the fields, they all defecate. The open field is their bathroom because guess what, their homes don’t have any bathrooms!
Keshav (Akshay Kumar) is an honest, goody two shoes man in the same village. His destiny to marry the right kind of woman is dependent on the Hindu rituals: he needs to marry a buffalo before he can marry a woman (and that too a woman with two thumbs!). This scene reminded me of the time when Aishwarya Rai married a tree in order to marry her husband Abhishek. 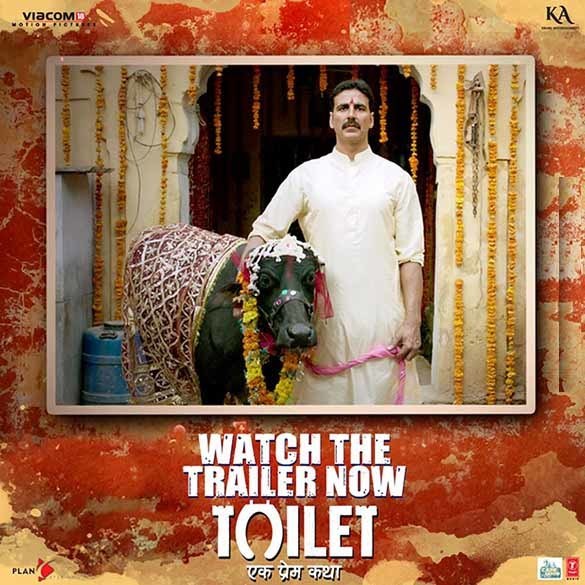 Keshav meets Jaya (Bhumi Pednekar), a vivacious, strong-headed, independent girl in town. She’s smart, sassy and mouthy- knows what to say and when. Despite their initial fracas, they eventually fall in love, through a series of songs, and decide to marry. The catch: she doesn’t have two thumbs. So they hatch a plan, create a fake thumb to appease Keshav’s father, and ultimately marry.
The shock for the new brides comes the morning after her wedding when she realizes the house has no toilet! She’s been coerced to go to the open fields with the other women. Jaya feels totally insulted and degraded. Hence starts the fights between her and Keshav. “I cannot stay in this house if there is no toilet. Either you get a toilet or I divorce,” says Jaya. It hits me that while we have the luxurious privilege of using a toilet in the comfort of our homes, there are people out there who according to their religious texts, cannot have a toilet in their homes.
The main crux of the movie then becomes all about Keshav winning the girl’s heart back by trying to fix the toilet issue in his house, despite strong resistance from his superstitious father. His quick, short-term solutions don’t appeal to Jaya, and so she leaves him finally, ultimately seeking a divorce.
Now comes the somewhat funny part of the movie. Keshav with his friend approach the media and the high up in the government sector to install toilets in their village. It turns out, according to the government ministers, that the state has done its job of installing toilets, but it’s the people who are not accepting the initiative taken by the government. So suddenly, it’s the fault of the people and not the government.
Does Keshav succeed in getting the toilet made in his home, and his village? Do Keshav and Jaya go through the divorce that’s been publicised now? Does Keshav’s father give in or fights on to maintain his religious beliefs? For that, you should see the movie.
So what do I think about it?
First off, I was rather taken aback by the notion that a strict segment of the Brahmin caste don’t believe a toilet should be at home. Women should go out to the fields. However, this made me question a lot about what the men do? Where do they go? Where do they shower? What do pregnant women do? What do women, who are on their periods do? What about sick men and women? There were so many questions running through my head it made me question the authenticity of this idea that no toilet should be made at home.
Secondly, the second half of the movie felt like as if it was sponsored by the Indian government. Look at how much work we are doing, says the government. It felt like sheer manipulation on the part of the movie makers to influence the Indian public. Yes, there is a wonderful public service message about the importance of having toilets, but it felt slightly diverted from the movie. Apparently, Mr. Modi was very happy with the movie! 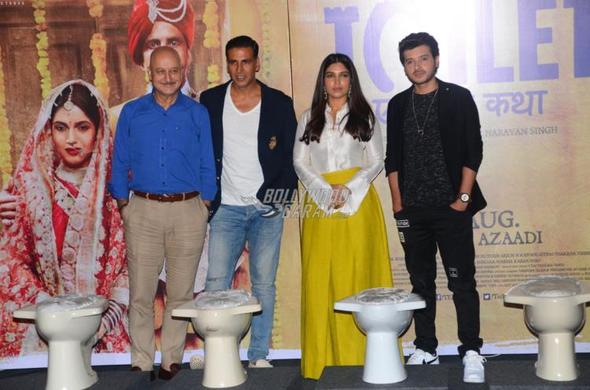 Akshay Kumar and Bhumi Pednekar, playing the in-love couple, are a treat to watch. They act solid, with strong delivery and screen presence. I felt for them and wanted them to stay together. Their chemistry was great, which is what most other actors lack in recent Bollywood films.
The film is a tad bit long, and tighter editing, along with the removal of some songs, could have made this film a little pacier and edgier. Technically otherwise, the film is par excellence.
At the end of it all, watching Toilet: Ek Prem Katha was like taking an adventure into the lives of these Indian villagers, and their struggles. It certainly opened up my eyes to how some people on this planet live, and the varied customs and beliefs they hold.
“In 2014, The Economist reported that around 130 million Indian households do not have an indoor toilet, and of the estimated, one billion people in the world who do not have access to proper sanitation, an estimated 600 million of them are from India.” (Taken from Independent newspaper).
With all this mind, I came home and thanked God I have a bathroom attached to my bedroom. Some things should never be taken for granted!

Do stay till the end of the movie, as we are shown a glimpse of the actual woman in India, who went through the same thing, and upon whose life the movie is based on. So yes, the concept of women raising their voices to have a toilet installed in their new home after marriage is actually true. The woman actually broke off her engagement and married another man that some NGO had referred her to, as he had a toilet in his home.
3.5 out of 5
https://youtu.be/ym4EJQ7XORk
Genre: Drama, Romance
Director: Shree Narayan Singh
Cast: Akshay Kumar, Bhumi Pedankar
Rating: PG
Synopsis:  Jaya, a newly wed bride, threatens to leave her husband if he fails to provide a toilet in the house. Despite his intention, the husband faces stiff opposition from his extremely religious father who says toilets are forbidden inside the house.
Running time: 155 mins
Seen at: Supercinema, Royal Palm, Lahore