The Self Help industry is big business. Countless books are written in this genre by these self-help gurus, along with numerous talks and seminars they conduct. The self-help industry has convinced the world that in order to stay happy and lead a meaningful life, you need to read these self-help books and get some expert advice from these gurus. It’s all about achieving happiness, setting goals and removing negativity from your life.
Unfortunately , we are living in a day and age where it’s all about instant gratification. Buy that brand new phone and be the envy of friends. Travel to an exotic location and be happy. Post an envious instagram picture and accumulate likes. The problem with instant gratification is that immediately following the gratification, one is led to the feeling of “what next?” and thus one slumps into an unhappy mood.
Granted, there are some rather good ones out there (Robin Sharma, Mark Manson) and then there are some rather useless ones (Rhonda Byrnes’ The Secret). There are some who are extremely popular with the masses (Anthony Robbins) and it feels like they are merely cashing in on their fame. Then there are some books that feel the author is on some huge ego trip (Jenny Lawson’s Furiously Happy).
It can become challenging to find that right book that suits you.
The other problem is that most of these books come out from the Western world, so their viewpoint is very American- Euro centric (The Happiness Project by Gretchen Rubin), or women-centric (Option B by Sheryl Sandberg). This creates a barrier based on race and religion between the author and the readers in this part of the world.
For those of us in the Asian world, it becomes a chore to decipher what works and what doesn’t work for us, keeping in mind our cultural and religious context. I wish there were some people from this part of the world who would write a book on depression or ways to better ourselves, but there are none.
In my experience, having read through most of the more popular ones (for example The Road Less Traveled- which is great in parts), I’ve been able to wade through the chapters, absorbing what suits me, and discarding what doesn’t apply to me.
Having said that, there is one book that revolutionized the way I think and made me wish I had read this book 20 years ago. It would have helped me deal with the people a whole lot better, and would have made me understand the complexities and ulterior motives of the people around me.
The premise of the book is rather simple and can be broken down into three major parts:
A. The Ego States
B. Transaction Analysis
C. The Four Life Positions
A. The Ego States:
Right from the moment, we are born, our brain becomes an HD drive. We start to record information. We take in information from our parents, siblings, friends. Because of this, every human being develops multiple natures and this can be broken down into three ego-states— Parent, Adult and Child (PAC).
Here’s what the three ego-states mean:
1. Parent– while growing up, we learn a lot from our parents, teachers, elders. As children, we take in what’s right and what’s wrong (for example, smoking is bad, don’t have sex before marriage etc). These are rules and restrictions that have been placed on us as children. We record all this information in our brains and the brain retrieves this information when we are adults.
2. Adult– if you are in this state, it simply means that you are able to identify both your Parent and Child ego states, and come up with a mature, rational and reasonable attitude in life. So for example, if someone is confrontational with you, you could react either with a Parent ego state (echoing what your parent would have done) or a Child ego state (echoing what your child self would have done). However, if you react with an Adult ego state, you would rise above the occasion and avoid the confrontation all together (this is a very simple example as life is a lot more complicated than this!)
3. Child– in this state, you are dealing with other people as you would have as a child. So for example, if as a child you displayed feelings of resentment because you felt abandoned by your parents, you will develop the same feelings as an adult when someone abandons you.
B. Transaction Analysis
Human beings are social animals. We cannot live in isolation. We crave for interactions. We survive by interacting with each other. However, what’s important is to understand this interaction for when you understand this interaction, you will know how to deal with people in a better way without having to feel you’ve been taken for a ride.
When one person interacts with another, known as Transactional Analysis, the person speaks from one of the three ego-states. The other person who responds also speaks from one of his three ego-states. Once you understand these three ego-states, and what they mean, your life will become a whole lot easier, with reference to dealing with people.
The other day, I was talking to a colleague, and I had asked him a question from a very Adult stance. His response was not what I was expected, and I realized that he was speaking from his Child ego state. This helped me understand him and so I guided the conversation towards the two of us having an Adult to Adult conversation. I helped him realize where he was coming from and this helped him understand himself better.
This will take some skill on your part to understand where the other person is coming from. However, it will also help you understand where you are coming from.
C. The Four Life Positions
There are four life positions that we all are in. These life positions determine where we are standing in our lives.
1. I’m not OK, You’re OK 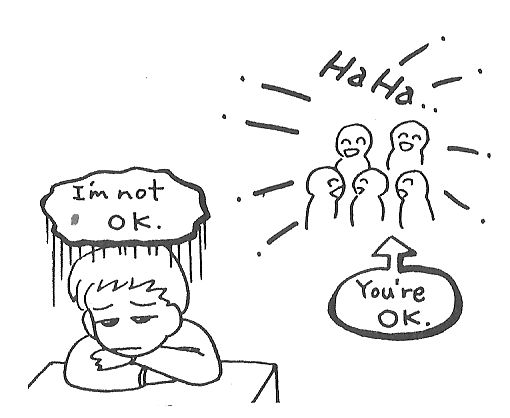 WWW.KORYUBUNSEKI.COM
The first position define our being Not OK in life. You are one down. This is primarily what a child would think: he feels helpless and defenseless, but sees his parents who he considers are ok. If untreated, this life position can carry on to our adult life, which can proved damaging.
2. I’m not OK, You’re not OK
The second life position determines that neither I am OK, nor are the people around me OK. There is a feeling of abandonment and difficulty, leading to the feeling that I am not ok, and neither are those who are around me, otherwise, they would have helped me. You are basically lost and unhappy.
3. I’m OK, You’re not OK 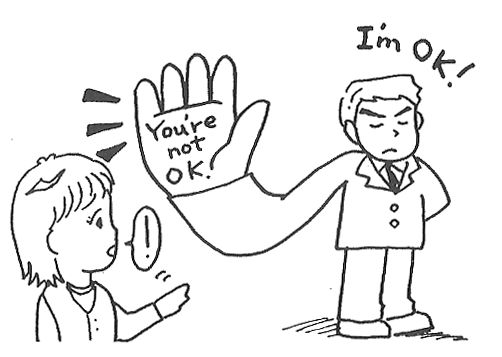 WWW.KORYUBUNSEKI.COM
The third position, I’m OK and you’re not OK, determines a life position where one heals himself and tells himself that he can survive, despite the fact that others around him are not helping him because they are not ok. You are one up. You are angry. An example of this would be a battered or abused child, who learns to survive on his own. This is a dangerous position to be in.
4. I’m OK, You’re OK 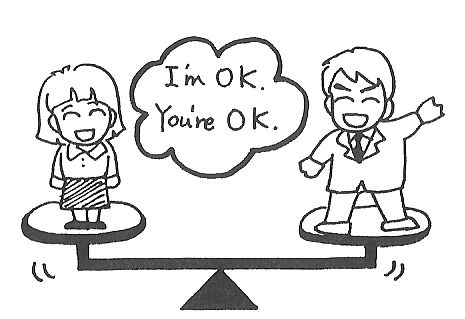 WWW.KORYUBUNSEKI.COM
The fourth position is something we all aspire to: I am OK and you are OK too. You are ready to get on with happiness. This position is what it all boils down to. In regards to the previous three positions, where the life positions are unconsciously formed, the fourth position is a conscious and verbal decision that one takes. Therein lies hope.
In short, the aim of Transactional Analysis is to “confront the patient with the fact that he is responsible for what happens in the future no matter what has happened in the past. Moreover, it is enabling the persons to change, to establish self-control and self-direction, and to discover the reality of a freedom of choice.”
The remainder part of the book deal with some very encouraging and interesting aspects of our personalities.
In We Can Change, the author shares his views on how we as adult can change our mindsets and personalities to become the people we are meant to be. Nothing stays permanent and an understanding of the PAC model will help you understand yourself more and will bring about a desire to change.
In another chapter, How We Use Time, the author talks about how we use our time, and an important element is discussed here: games people play. He defines games as “defenses to protect an individual from greater or lesser degree of pain.” In other words, when you interact with people, others will have an ulterior motive and will speak to you in a certain manner signifying their intentions. There are ways to decipher this, through verbal and nonverbal clues.
Harris further talks about how we can apply the PAC model in marriage, in children, and in adolescents. To understand this further, reading the book is a must.
The last two chapters are somewhat not that engrossing as the author talks about taking the PAC model to the larger scheme of things: world politics.
Initially, when I started the book, I was feeling a little hesitant and didn’t want to confront with a barrage of information and self-help mumbo jumbo. But I am so glad I read this book. It’s definitely helped me gain a deeper insight into the psychology of a human being and where they are coming from. It makes me less judgmental and more open to the idea that all of us are on our own unique journeys.
I’ve read a lot of books on self-help, self-memoirs, on happiness, on achieving success but none have impacted me as much as I’m Ok, You’re OK, primarily because the concept of human interaction is explained so well and so thoroughly, that it becomes obvious as to why people behave the way they do and why they play games. It’s not rocket science but rather basic. This is the main reason why this book succeeds because it’s not focused on the concept of instant gratification but rather to be patient and invest your time in focusing on the here and now, after which you can reap the rewards.