When I heard about this new Spiderman movie coming, my initial reaction: not again. Why is there is a need to reboot a superhero franchise movie for a third time now? Having said that, I have to take back my initial reaction. Spiderman: Homecoming was actually a great movie.

Though, I have to admit that I appreciated the movie a whole lot more thanks to my younger cousin who filled me in with all the references. I had become somewhat disconnected, and lost track as well, of the huge numbers of superhero movies coming out and they are all seemingly connected somehow.

Spiderman: Homecoming stars Tom Holland (a 19-year-old, whose boyish looks and voice fit the role of the 15-year-old Peter Parker extremely well), as Peter Parker/ Spiderman. He’s just completed a mission with the Avengers (this movie takes place after the events of Captain America: Civil War) and is hungry to take part in further missions. His mentor, Tony Stark/ Iron Man (Robert Downey Jr, in a role that didn’t really fully justify his true potential) wants Peter Parker to stay in school and give up his superhero duties as he is not yet ready to become an Avenger.

Peter lives with Aunt May (the ever dependable Marisa Tomei….I want to see more of her!) He is just like any typical high school kid, who has an Asian friend and is not part of the cool clique. A girl (played by Zendaya), who calls herself a loser, reveals herself to be MJ towards the end, pretty much provides some of the best laughs in the movie. Peter’s life in school is turned upside down when he ditches the academic decathlon to save his friends from a precarious situation atop the Washington monument.

Spiderman’s nemesis comes in the form of Adrian Toomes/ Vulture (played gleefully by Michael Keaton). While I won’t get into the plot, the battle between Spiderman and Vulture is all over a bunch of weapons that Vulture seizes from Stark Industries. 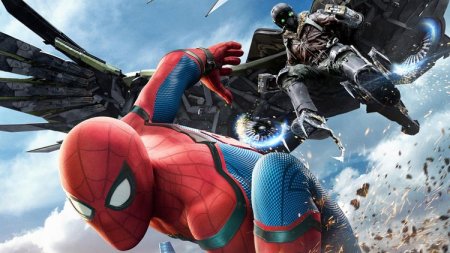 So what did I enjoy the most about the movie?

It was a rather refreshing reboot, and as I understood later, probably the most faithful adaptation of the comic books. Tom Holland brings some level of vulnerability (includes moments where he weeps and struggles), goofiness (like any other schoolboy going weak in his knees over a girl) and a whole lot of charm. He’s unbelievably talented and it’s a sheer joy to watch him essay the role of Peter Parker/ Spiderman. There is a lot of fun watching this precocious yet extremely daring young boy balance his life between school and battling evil men.

The comic timing, the laugh out loud moments, the in-jokes, the references to other Marvel movies all made for a great fun watch. There is, however, one scene that provided for a complete shocker and jaw-falls-to-the-floor moment between Peter Parker and Adrian Toomes.

Which brings me to the not so good part of the movie: the running time. It’s a long movie (at almost two hours) and demands patience (unless you are complete Marvel geek!). The action scenes were uninspiring (thanks to so many far superior action scenes we’ve witnessed in many other Marvel movies!) and somewhat repetitive, save for one scene that involves Spiderman, a helicopter, and a window.

Spiderman: Homecoming felt like a movie that’s aimed for the younger generation. I enjoyed the Spiderman that was played by  Tobey Maguire (not the subsequent ones) and I just felt like Homecoming was aimed at the younger audience. Despite that feeling, I still had a great time and thanks to my cousin who filled me in with all the necessary references and behind the scene details to keep me well informed.

Fun, engaging, thrilling that made for a great night out.

Cristian Mihai
How to be cool